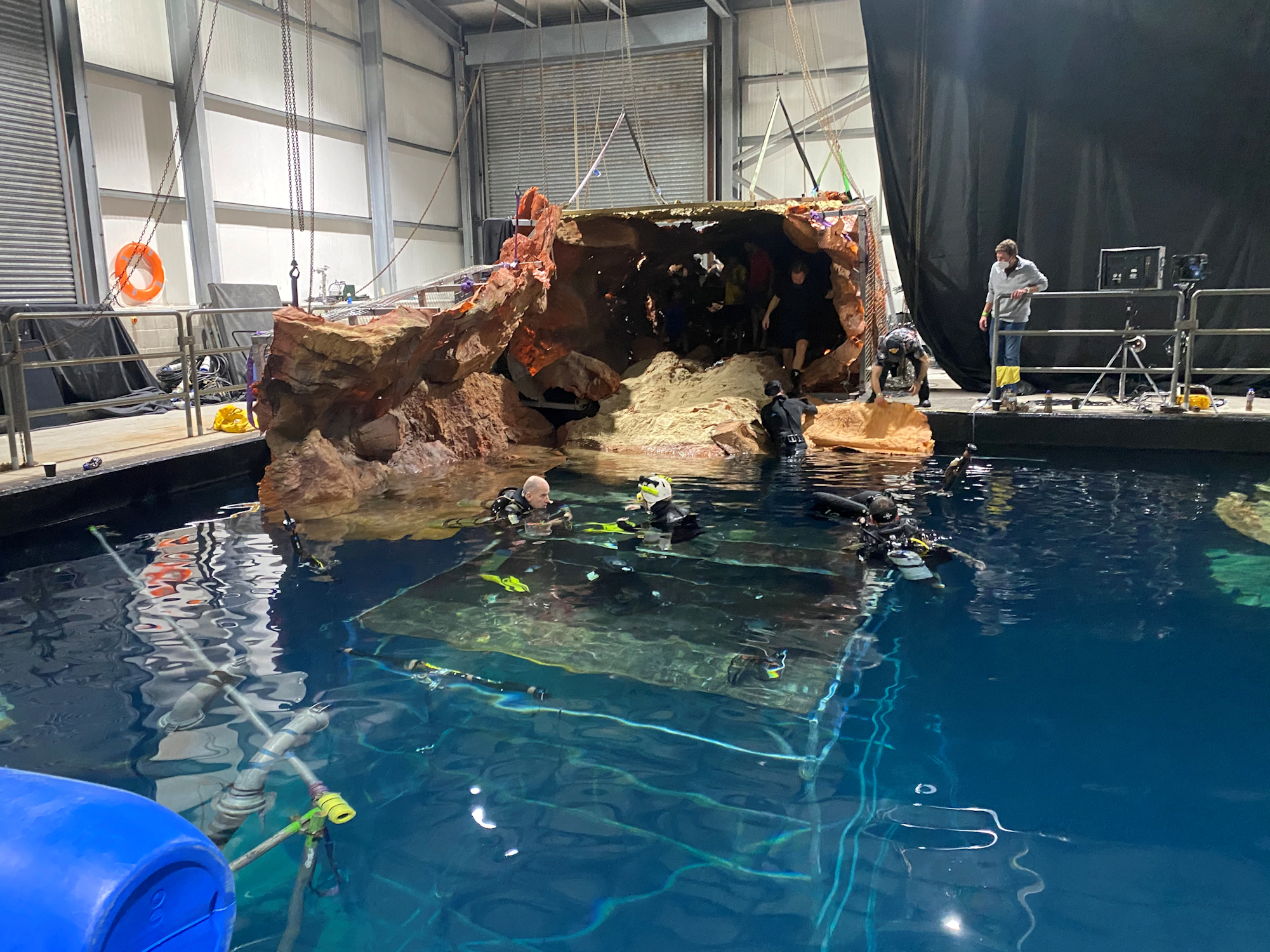 RECONSTRUCTING SCENES FOR ‘THE RESCUE’ BY ROGER DENGATE – CONSTRUCTION MANAGER

RECONSTRUCTING SCENES FOR ‘THE RESCUE’

“Believe, believe” – these were the words one of the British cave divers said out loud to himself in disbelief  when he first discovered all twelve members of the wild boars football team and their coach alive but trapped  2.5 miles inside a flooded Thai cave in June 2018. Just over two years later they were also the words I said to  myself when I landed the enjoyable position of construction manager on the UK filmed reconstruction part of  the recently released docu-drama “The Rescue”. This National Geographic production, directed by Jimmy Chin  and Elizabeth Chai Vasarhelyi tells the story from the diver’s point of view using mostly footage from the actual  rescue. The scenes we reconstructed in the UK were to fill in the gaps such as the rescue divers long swim  through the caves, although amazingly the moment the divers first discovered the trapped boys, the “believe”  scene mentioned above, was real.

I was recommended for the job by Rod Vass of Armordillo who had designed and made the scenery for this film. I first met Rod on the set of the shark movie “47 metres down uncaged”, directed by Johannes Roberts,  production design by David Bryan, art director John West. As construction manager on “47 metres… “ one of  my jobs was getting the numerous and varied caves Rod had made for that film into the Underwater studio in  Basildon and the Underwater stage at Pinewood. For “The Rescue” Rod had made just four sections of cave,  ingeniously designed to be reconfigurable so that they could represent the miles of flooded passageways and  the various open caverns of the cave system. During pre-shooting discussions about how to configure the  scenery I mentioned that I happened to have a garden full of caves and flat sections of rock face leftover from  the shark movie which I hadn’t yet gotten round to breaking up. I showed pictures of my garden caves to the  divers who said they were very similar to certain sections of the Thai caves so a lorry was sent down to my  place in Kent where my son loaded up the 4 selected items. This added a useful bit of variation and extra length  to the recreated caves allowing longer sequences to be shot. 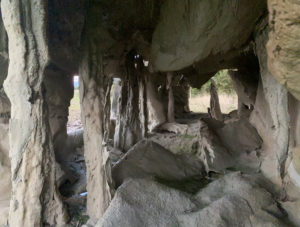 Caves previously used in “47 Metres Down Uncaged” in my garden.

The first week of filming was all in Basildon. Early starts there on cold mornings gave rise to huge amounts of  fog above the very warm water. This was fixed by the hire of a large indirect fired space heater from Andrew  Sykes plc who were also providing several large pumps to create the effect of currents and flowing water  through the caves. Quite a few of the scenes required the caves to be semi submerged so our riggers Ian and  Roy made scaffold frames to raise the caves up from the floor of the tank. These frames were made outside and  then maneuvered into the studio with a 17 metre telehandler where the studios dive team took over. The caves  were floated around under air bags and bolted to the scaffold once in position. At the weekend all the scenery  was moved to Pinewood on a convoy of three artic lorries provided by the excellent KE Kent transport located  right next to the Underwater Studio in Basildon. The dive teams at both studios were brilliant as always, the  extra space at Pinewood was necessary for the creation of the scenes where the caves opened into above water caverns built on the large topside of the tank there.

From my position topside in the underwater stages, it was quite difficult to make much sense of the action.  Vague shapes could be seen passing back and forth through the caves, sometimes the only signs of life were  bubbles breaking the surface. The scenes set in the various air pockets and open caverns were more dramatic  to watch. 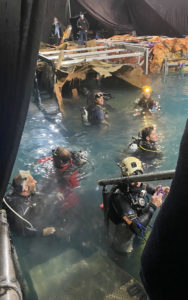 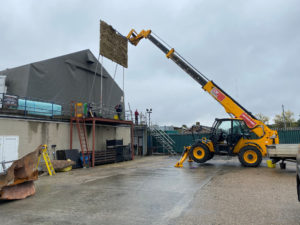 Caves set up as semi submerged sections on  scaffold legs. Water is 20ft deep.  Rescue divers wearing helmets, playing  themselves in the production alongside  safety divers working for the studio.

In the early stages of the actual rescue, four adult pump workers had been discovered trapped a short way into  the entrance to the cave system and it had been necessary to dive them out immediately. Although the workers  were only underwater for 30 seconds, they panicked and wrestled with the rescuers with very nearly disastrous   consequences. Informed by this experience the rescuers were certain that getting the kids out in a conscious  state on what would be a two-hour dive would be impossible. In the end, with oxygen in the cavern running low  and with the rainy season threatening to completely flood the caves and with the expert help of an Australian  cave diving anesthetist the kids were turned into inert packages using a mix of drugs which the divers had to  top up along the way. The boys and their coach were brought out one at a time over a period of three days. A  very brave young actor played the part of a comatose Thai football player, repeatedly dragged through  underwater scenery and pulled up the rocky beach at the end of the dive. 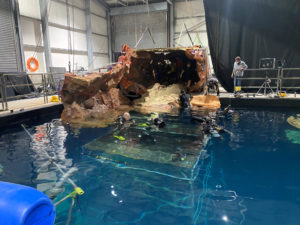 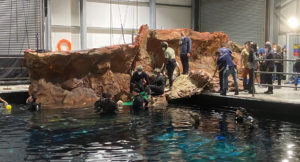 Section of the final cavern in U stage Pinewood where rescued kids were slid up a sandy incline on a stretcher to medical attention and safety.

I don’t think I fully appreciated the miraculous nature of this rescue until I saw the film at its London Premier  along with the film makers, The Thai ambassador, the rescue divers, uniformed representatives of US special  forces and the Thai Navy Seals, one of whom lost his life during the rescue. Not all hero’s wear capes, some  wear tight fitting rubber, fins and air tanks. The international team of rescue workers lead by the men who  feature in this film and who played themselves in the reconstruction had a weekend hobby that had made them just about the only people who could have devised and carried out this almost impossible operation. It  was an honor to meet them, their abilities and their modesty and humor were inspiring.

For my part, I make no claims to false modesty, so if anyone needs any help with developing underwater scenery or with getting scenery into an underwater stage, you know where to find me (BFDG)! 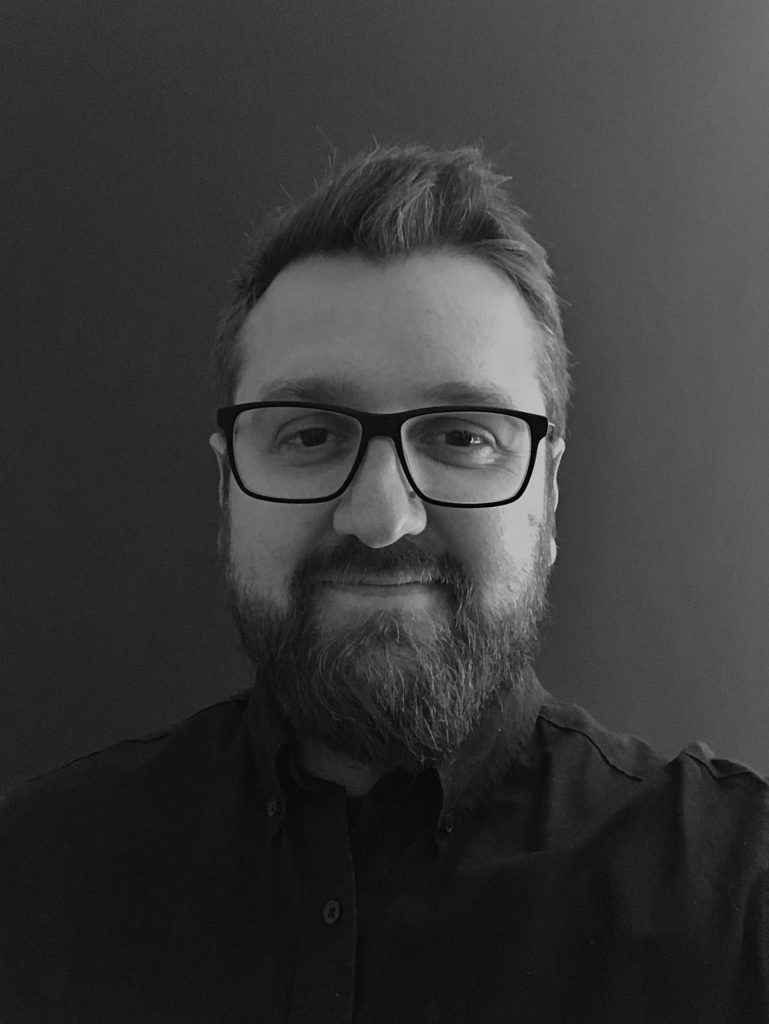 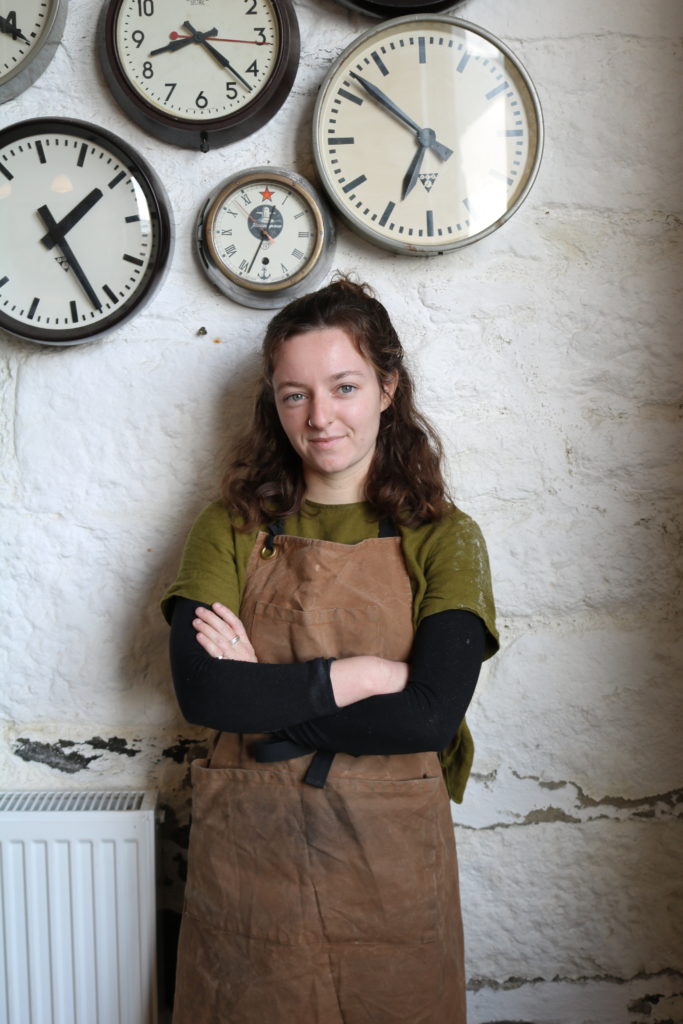 A Day in the Life – Rosy Seal, skinflint design